Never Too Many Cooks... 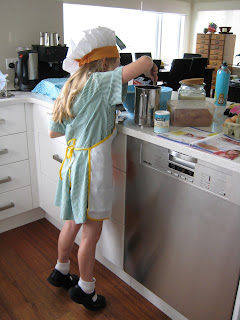 Last night I taught The Boy how to make a bechamel sauce. He wanted to know so that he could become the Lasagne King. He could also make half a dozen other dishes now that he can make a white sauce, but he probably won't. His cooking tactic is knowing how to make specific dishes, and getting really good at them, then moving on to something new. The Girl, on the other hand, cooks like a jazz musician, riffing on a theme. When she learned how to make a white sauce, she experimented with all the ways she could think of to use it, and developed a chicken pie filling to die for. The Girl is never held back by mere recipes.

Rosy is still at the stage where she is learning techniques. How to chop an onion safely, why you cook the onion before the garlic, why you cook onion on low, but meat on high, how to deglaze a pan. She is very interested in learning to cook dinner, and has already mastered baking enough for her purposes, which is to make extremely elaborate cupcakes.

Posy has two recipes - chocolate cake, and chocolate cookies, both of which leave mess from one end of the kitchen to the other. She much prefers to sit on the other side of the kitchen bench and eat the raw ingredients while someone else cooks, because she is a bit of a princess, but never fear, she will be learning to cook as time goes on, because I want to send all my children out into the world as capable human beings who can actually feed themselves.

It never ceases to amaze me how little some of the children's friends know about food and cooking. Rosy will have friends over, and they will make cup cakes, and clearly these twelve year old girls have never cooked before. They refuse to crack an egg into the bowl, in case they 'do it wrong', they're scared of the beaters and don't know what the little lines on the scale mean. A number of them are amazed (and not a little concerned) that we send them out to pick dinner ingredients out of the garden. These are not deprived children in any way, but from our nice middle class neighbourhood. And from the intelligence reports I get back, it seems that these children eat a lot from the frozen food section at the supermarket, or large cuts of meat with bagged salad or frozen veg, and apparently, 'no-one else even has a slow cooker, Mum.'
'Poor things,' I say, to be met with snorts of derision from my progeny.

This isn't just a feel-good story about the wonderfulness of my children. Clearly they would love the chance to eat out of the frozen food section 'like normal people'. Although actually they also have friends whose parents cook just like I do, and have gardens they eat from, so I am not such an anachronism as they sometimes portray me. But I do think it is very important that they have an informed choice, and useful life skills to take them into adulthood. And they love to bask in all the compliments they get for their wonderful cooking. What better reputation to have than for being a great cook?

It is not necessarily an easy road, teaching children to cook. It is so much more peaceful to do it yourself. There have been years of tears and tantrums (mostly mine) when the floor is covered with more ingredients than the mixing bowl, the time the blender lid got left off.. when the walls are splattered with spaghetti sauce, when the mini cooks use up all the key ingredients for tomorrow's dinner and don't put them on the shopping list. When they insist on 'doing it themselves' and you sit in another room, flinching at every crash coming from the kitchen. The wonderful thing is though, when you have weathered this maelstrom of mess and emotion, and bravely eaten burnt offerings and cookies where teaspoons and tablespoons of baking soda may have been slightly confused, there comes a time when confident, competent cooks emerge, people in your family other than yourself who can and will cook dinner. Priceless.
Labels: children food parenting

menopausalrunninggirl said…
You are much braver than me! I let my elder lad heat stuff up and maybe poach an egg for his morning toast,but not ready for the tomato splattered floor of hell!!!
Saturday, 19 January, 2013

Michele @ The Hills are Alive said…
You're right it is so worth the pain and the patience. Growing them up to be competent human beings really is the only way to go....and EVENTUALLY you will reap the benefits - a meal cooked by someone else. Was quite able to cook an entire meal including roasts etc around the age of 12 and fully intend to pass this on to my two also. PS I love how you look at all of your children with their various ages and stages and interests and personalities around this topic of cooking. Sometimes (sometimes!) I wish I had more children just for this pleasure in seeing their own individual little personalities developing - all from the same origin but all so different
Saturday, 19 January, 2013

Jo said…
Michelle, I'm sure your two provide all the personality you could ever want, most days! I love your description of your childhood cooking prowess, it is almost exactly like the description of Norah in The Billabong Series, my favourite Australian children's classics. And I always wanted to be just like Norah!

Mrs Frantic, there are many days when I feel like all this cooking is a bit much, like when Posy tipped sugar all down the inside of her dress this morning. How? How?
Saturday, 19 January, 2013

e / dig in hobart said…
what a wonderful post. i know adults who are like your children: ones who would never deviate from a recipe, thinking it must be the authority never to be challenged or changed. others who take recipes as an inspiration/ vague road map/ general guide to be happily transformed with all sorts of possibility.
and it is sad to think that there are people/families who are passing on their ignorance/ fear/ indifference towards food to their children.
i'm sorry though, the sugar down the dress is hilarious.
Monday, 21 January, 2013

Jo said…
e, I set myself up for this hilarious moment. Picture one of those square storage jars with the cork tops, stored just above an 8yo head height, then picture me leaping towards her as she pulls it off the shelf sideways, the cork falls off, the overfull jar sending a stream of sugar down the inside of the gaping front of the pale blue satin princess dress up number...
Monday, 21 January, 2013

Heather said…
I am amazed at how many children around where I live think cooking is heating up something frozen in a box in the microwave. My son (12)told me the other day that his teacher asked the class if anyone knew what an artichoke was and only 3 kids raised their hands. 3 out of 35. He couldn't believe it.

Teaching our children how to make nutritious, homemade meals is such a gift to them, I think.
Thursday, 24 January, 2013