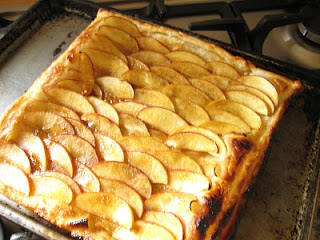 So I have a plan for this year. I have spent ten years planting fruit trees and perfecting my vegie garden, and I love, love, love pottering about and getting my hands dirty. Planting, pruning, all good but harvesting, cooking, preserving? Not so much. I would estimate that I would be giving away/composting about half of any given crop. Not such a terrible thing, but I also want to be more thrifty, use what we have, not spend so much on groceries. The Man says that the reason we spend so much on food is that I buy everything organic/local/free range and he prefers Home Brand marmalade anyway. I say yes, but you can't sell marmalade for $1.55 if you aren't using cheap imported labour, and anyway it comes all the way from Denmark, food miles anyone? He says even if it is made by underpaid Armenians, at least there is quality assurance as he rolls his eyes at the local marmalade which he is convinced is made in someone's garage. The debate continues.

Meanwhile, I know that our grocery bill is high because I buy way too much food because we might all starve if I don't lay in supplies enough to avert a siege. Then I don't cook it all, then I end up composting it and we have the most expensively supplied compost heap in Northern Tasmania (The Man hasn't been complaining about our grocery bill, by the way, because he isn't that silly/foolhardy. I have been appalled and he, as usual, is ready with a bright idea to solve the problem).

So, while vaguely resoving not to buy quite so much food, this week I have devoted myself to not wasting it. The gala apple tree is heavy with beautiful red apples (look closer and you will see codlin moth depredations, but it looks lovely from afar), so I have been chopping and freezing, and chopping and drying, and now that I have found some preserving rings (try the hardware store, who would have guessed? Aisle 5), I will be filling all the preserving jars as well. Of course, being Autumn now, everything is ripening at once and I also have tomatoes dropping everywhere, so I also made many jars of Grandma Joan's patented tomato relish. The really funny thing is that in my mammoth decluttering sessions last year I threw out all but one small basket of my enormous collection of Useful Jars, because I hadn't used them for years. So this year I have made plum jam and relish and now have run out of jars, and am begging them from everyone I see. Ironic huh? So be careful how you declutter. Thankfully, the universe is not short on glass jars, and has graciously provided.

Above is a batch of a very easy yummy dessert - layering thin apple slices across puffed pastry, slathering on a mixture of sugar, cinnamon, melted butter, baking in a hot oven. Believe me though, my family is getting a little tired of apple based desserts. They are also beginning to dislike the word 'thrifty'.
Labels: food garden projects this ethical life thrifty

Elinor said…
How exciting to be eating your own home grown produce. We hope to start our own vege patch this coming winter and one day hopefully we will have chickens in a chicken coop that seems to be taking forever to be built - big grin!
Monday, 08 March, 2010

If you quickly drop apple slices in boiling water, say about 2 minutes, then cool under tap water then drain they go very nicely on top of this coffee cake. And it makes a huge slab of cake too.

Jen said…
Oh, and a sprinkling of raspberries too. Yum! Warm with cream makes a nice, not so healthy, breakfast.

Jo said…
Helen, I would love chickens! So far though, I am still trying to work out how to manage vegetables and children. I will work up to chickens! Good luck with your garden.
And Jen, cake for breakfast - what a precedent to set. I am afraid my family gets a DIY breakfast. Thanks for the recipe though - they may get it for dessert if they ever stop complaining about apples.
Tuesday, 23 March, 2010